About the Author: Michael Mosota

Michael Nyamwaya Mosota is a multimedia graphic designer with the Nation Media group and a 2013 Internews data and health journalism fellow. During the four-month fellowship he hopes to learn to mine data and do infographics across media platforms. He made the big leap into the media because his then mentor Mr Kamau Wanyoike, who has been in the industry for close to 40 years, gave him the chance to learn new things and he hopes to one day mentor upcoming graphic designers and journalists.
Author Website: http://nation.co.ke
Permalink to single post

Media organizations across the world such as The New York Times, Washington Post, and the Guardian – regularly incorporate dynamic graphics into their journalism. Other than using static visuals to support stories in form of diagrams and charts, especially for print media, the internet has provided lots of space that journalist can use to visualize data in telling long-form stories.

DataWrapper is one of the available tools that aid journalists, designers and developers to integrate visuals into online stories. Visuals have become an important way of telling stories.

Guided by the basic elements of story telling – who, what, where, when, why, and how – visuals need to evoke the ‘so what’? There is no need to use visuals that confuse the reader instead their use is guided by simplifying data for consumption and revealing stories hidden in data.

Since DataWrapper is an Open Source tool, users are able to upload data and create simple, embeddable data visualizations in telling stories. Data journalism has facilitated the quick utilization of visuals to enhance stories with the aid of designers and developers.

In the example below, the readers are able to see the number of times Kenya Rugby has won, lost, or drawn, with clear reference to the number of matches Kenya has played with other countries. The simplicity of using DataWrapper makes it easy for a far broader population to both produce and consume visuals. 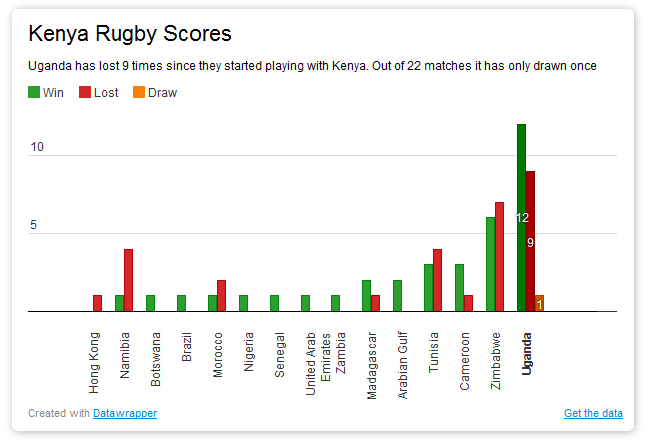 For starters, it is important to source, clean, and analyze a data set that best illustrates the story using available tools such as Excel, Google spreadsheets, or web table. 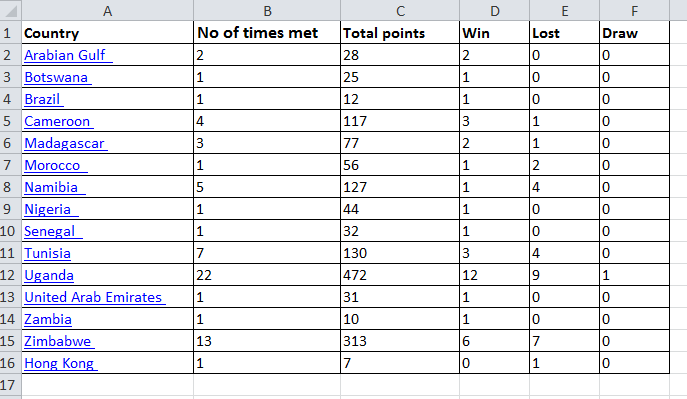 Once done, copy the text and paste the contents into DataWrapper’s first screen.

Choose upload and continue for DataWrapper to check and describe the data. There is an option to link the data to its source and the name of the organization that produced the data 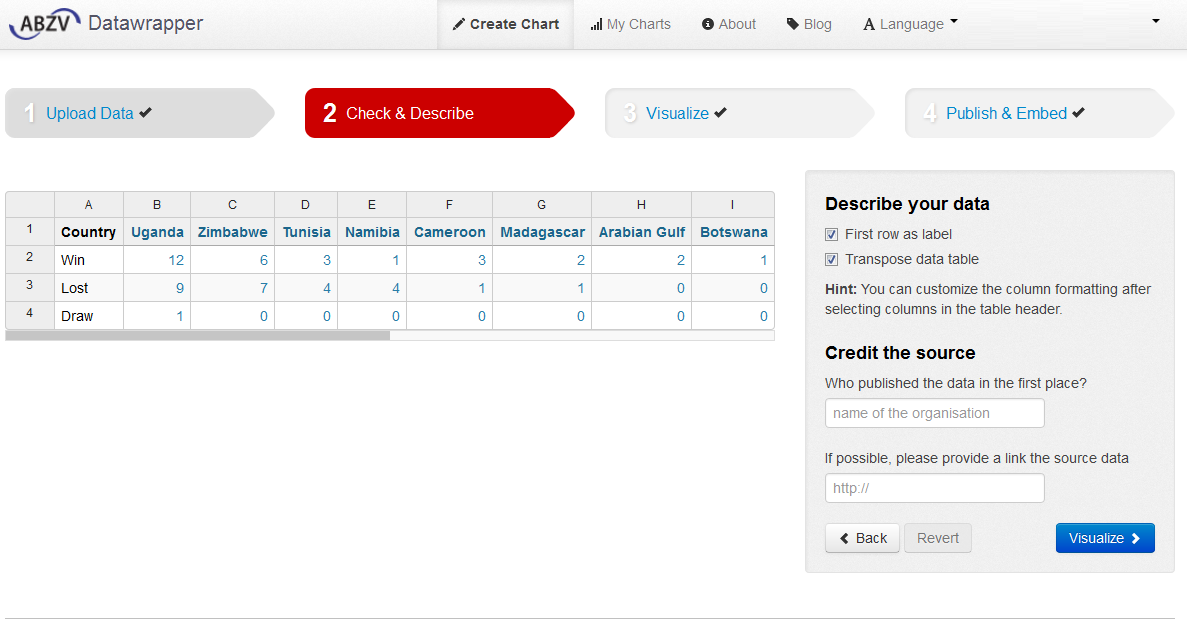 Follow the next step to construct and customize the visuals that best illustrate the story. A choice is available from the select chart option. 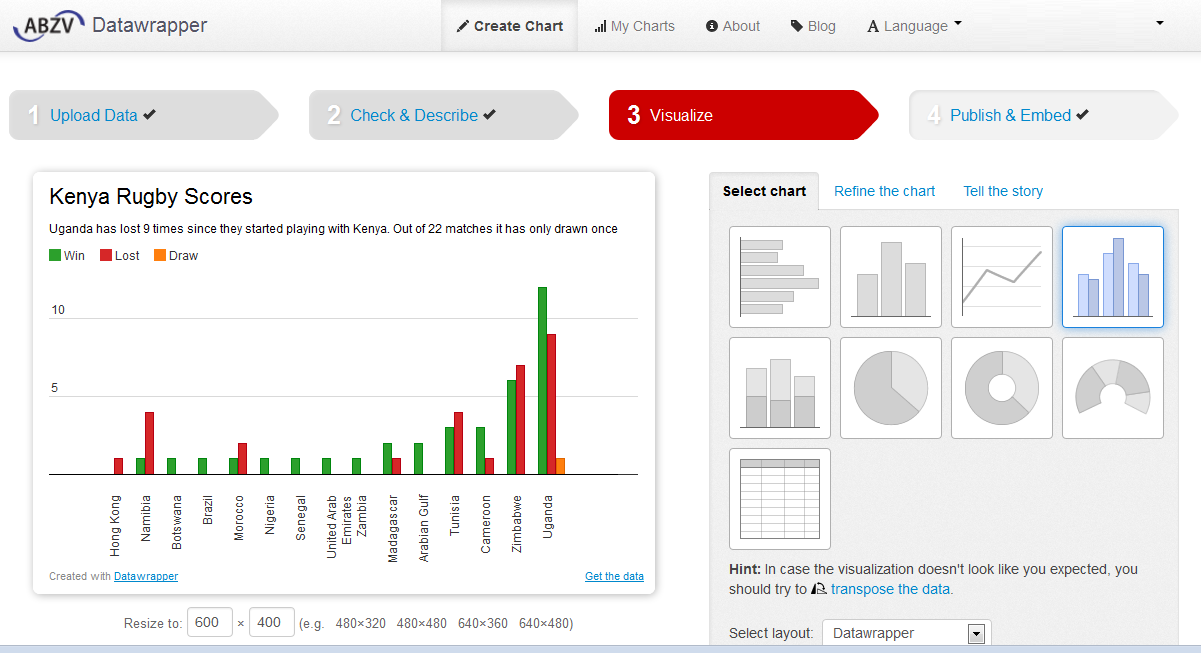 The chart can be refined further by customizing the colours to best suit the visuals, as well as including a headline and short brief for the story before publishing.

After done with editing, publish and embed option, provides a link to the visual as well as embed code that can be pasted on another site. 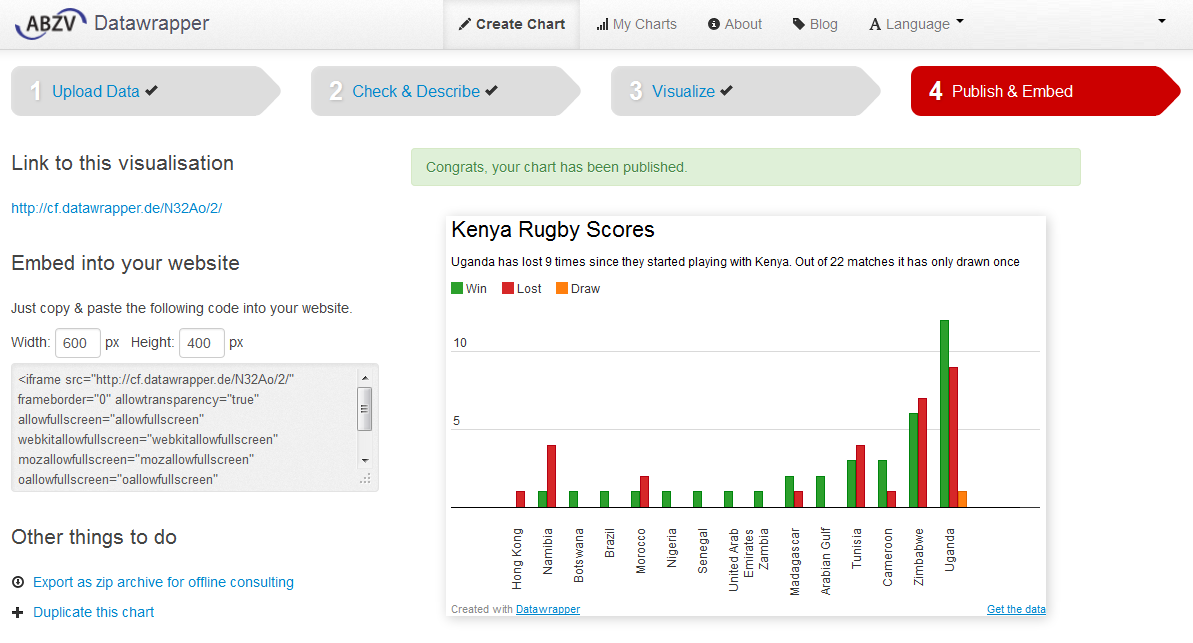 Once data has been cleaned and uploaded to Google Fusion Tables, it is important that readers comprehend both the map and the data displayed about each geographical region when selected. A chart is one of the ways used to represent this region-by-region data for the readers. Google Charts make it possible to create interactive dynamic charts for the readers. END_OF_DOCUMENT_TOKEN_TO_BE_REPLACED

Exploring the Use of Google Fusion Tables

Lots of media houses today take advantage of the power of Google in Fusing Tables to create interactive maps of data. It helps web viewers gain insight into information available on the map by fusing a geographical border file and data organized by those same geographical units. END_OF_DOCUMENT_TOKEN_TO_BE_REPLACED

Simple visualizations make large amounts of data easy to understand at a glance, allowing readers to engage more directly with the data. Choropleth maps are an iconic example of presenting data using colour intensity to illustrate prevalence rates. For example, blue signifies the high chance a child raised in the bottom fifth rose to the top fifth while red shows low chances.

But the process of making these maps is not straight-forward for non-developers. The journalist needs to evaluate the amount of detail given and whether the designer followed these steps in deciding what data to include in the map. END_OF_DOCUMENT_TOKEN_TO_BE_REPLACED

Every viz should tell a story

How designers use infographics to tell stories