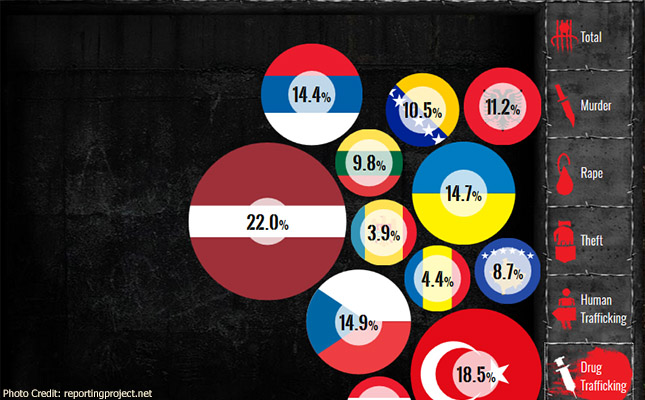 Jail Crunch visualises crime data by crime type from Eastern European countries.  It puts each country’s crime problems in perspective by enabling readers compare crime per capita, by type and by gender. The Organized Crime and Corruption Reporting Project (OCCRP) is a network of non-profit investigative journalism outlets operating across Eastern and Central Europe.


For this project 37 OCCRP reporters filed freedom of information requests to prison authorities across Eastern Europe. The interactive visualisation is a compilation of the data received from each prison authority, organised to demonstrate similarities and differences between prison demographics and crime categories across the region.

The data provides a wealth of data journalism angles for local journalists:

To complement the data findings, Jail Crunch includes rotating interviews with convicted criminals to explain how crime works in the region.

East Africa’s criminal population is often forgotten about by mainstream media.  Yet an analysis of the criminal population can be a basis for evaluating local judicial systems, government’s effectiveness in combating different kinds of crime and conducting an analysis in criminal patterns and trends, especially in the context of the perceived rising threat of terrorism.