Why East African countries are vulnerable to terrorists 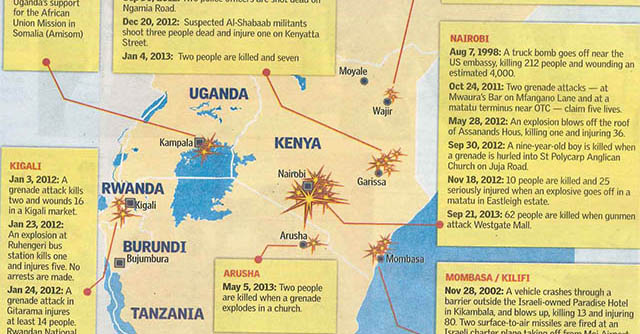 A week after the terrorist attack on Westgate Mall in Nairobi The East African published an indepth story on why East African countries are vulnerable to terrorists.
The article uses a timeline and a map to show the magnitude of the problem from a historical perspective.

At a glance a reader can see when, where, and how many people were killed or injured in Kenya and in the neighboring five countries during terrorism attacks.
The colorful map and guiding arrows draw the reader into the story.

But the graphic designer could have used more creative charts rather than a table to present the data and a more creative timeline.

To learn how to use data to enrich your story and create compelling infographics, contact us at [email protected]