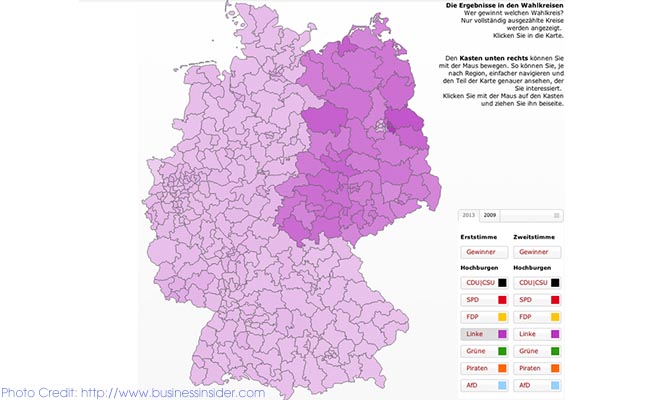 The big news out of Germany in September was that Chancellor Angela Merkel led her conservatives to a convincing victory in Germany’s national election.

The Business Insider  published an insightful map on the election that shows that Germany remains divided decades after the reunification at the end of the Cold War.  The simple map reveals that the socialist party remains massively more popular in the area that was the former East German.

The story also includes six other maps that depict how old historical events still haunt the world today. They include a map on the 2007 parliamentary election in Poland, the 2004 Ukraine election, the US presidential election and the UK election. The UK map shows that the Scots still vote differently than the English, hundreds of years after the Acts of Union 1707.

Historical events have also shaped politics in Kenya. Ahead of Kenya’s General Election early this year, Data Dredger analyzed evidence gathered over the last 20 years, which revealed that violence is deeply rooted in Kenya. The analysis, which concluded that causes of violence are as diverse as they are important, inspired K24 journalist Violet Otindo to do a story titled:  The long road to peace.

To learn how to find trends in data and create effective visualization please contact us at: [email protected]