“In Turkana, the economy is based on its livestock. Your goats are sent to Nairobi for slaughter; they come back as processed meat that is then sold in the local markets”.

Rhoda Layor, the Turkana County cabinet member in charge of energy and the environment, used the goat analogy in a recent interview with the Land Quest team to illustrate just how unprepared Turkana is to benefit from the 2012 discovery of oil in the region, which is expected to generate million barrels of oil once production begins in a few years. “We don’t even have the resources to gather rainwater for use,” she explained.

Turkana, in the northwest corner of Kenya, is the poorest and most isolated region of the country. Semi-nomadic pastoralists have difficulty accessing even basic necessities, such as clean water and food. The donors aid pours into the region to assuage the suffering stemming from regular draughts and widespread malnutrition.

Layor’s appraisal of the current reality in Turkana may seem dire. Yet, it is based on the premise that if the county is not fully prepared for the economic boom brought on by the recent discovery of oil.

Unknown to Turkana County residents who we interviewed, Tullow Oil, the British company leading the exploratory drilling, made payments to the national and county government. Since 2012, Tullow Oil has paid a total of $6,331 or sh538,135 in taxes and $950 or sh81,005 in other fees to the national government. Since January 2012, Tullow has paid the former County Council of Turkana and the current Turkana County Government a total of sh25,240,550 as compensation for three oil blocks; 10BA, 10BB and 13T. This information was provided to the Land Quest team not by the Government of Kenya but rather by internal documents provided by Tullow representatives. The payments have not been publicly associated with any community development projects or other government works.

World Bank, corroborated by Tullow, estimates put the current Turkana oil resources at 300 million barrels. This means one thing: wealth. But in a society that struggles with massive economic inequalities, the newfound riches may end up exacerbating economic disparities and fuel corruption. As rich an oil strike as this may seem, the amounts are negligible compared to Nigeria, where oil is extracted at a rate of two million barrels a day and poverty persists. This may means that the lives of the poor either in Turkana or the entire country may not change, noted Kwame Owino, the Executive Director of the Institute of Economic Affairs.

“Petroleum can really destroy what 70% of the Turkana survives on,” warned Christopher Ekowum, County Executive for Pastoral Economies and Fisheries. 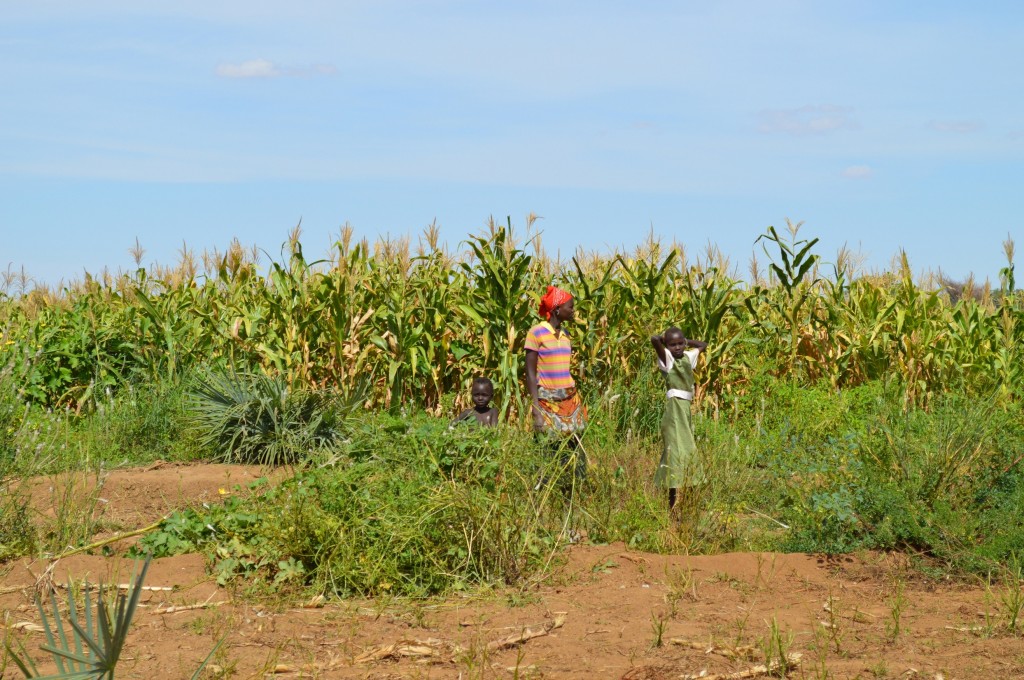 Here at the Kabulokor irrigation project in Loima Constituency over 2,100 families supplement their income from herding goats, cattle and camels with crops grown by the community but even a shift to agriculture activity is an exception for this traditional pastoralist society.

Corruption that lies behind

Tullow Oil Company is the leading oil exploration company in Kenya and has a 50% stake in most sites in Turkana where oil has been discovered so far. The contracts between the Ministry of Energy and Tullow Oil -together with the profit-sharing agreements they contain- have been kept secret by both parties. The Kenyan Petroleum Act requires that oil companies like Tullow Oil to consent to making the contract public before any details are shared by the government. Neither side is inclined to share and there are no access to information procedures to force a release. The Ministry of Energy did not respond to our repeated requests for an interview.

“The exploration stage is where you can make a lot of money”, explained Hadley Becha, the director of the Oil & Gas Working Group, part of a network of civil society organizations that form Community Action for Nature Conservation. “If you are dealing with corrupt officials and for people who want to make a windfall profit this is the time to be as secretive as possible”, he added.

Complaints have also been made about corrupt hiring practices in the region. Francis Mariao, program manager of the NGO Agency for Pastoral Development, said he was aware that Tullow Oil is hiring relatives of politicians.

Emeri’s concerns were backed up by several NGOs including the Oil & Gas Working Group – all expressing suspicions that politicians at the national and county level had been granted shares in the company or had benefited from contracts for related services. As part of this investigation, a petition was submitted to the Kenya Attorney General Office of the Registrar for a list of shareholders in Tullow Oil and the Canadian partner company Africa Oil, as well as various Turkana companies alleged to have benefited from unfair contracting practices. Five months after, a response has not yet been received.

What about the local economy?

The risks of corrupt practices can have a devastating impact on the local economy if tenders, contracts and hiring are driven by nepotism rather than through competitive open bidding practices. And delay tactics to stall economic regulation may come at the expense of economic growth of the region, warns a recent assessments funded by the United Kingdom Department for International Development and the World Bank.

Tullow’s Mbogo argued that Tullow activities support local industries including construction, drilling, telecommunication, catering and security. The Turkana County Transportation Association formed to try to scale the barriers that exist for even low-skilled and semi-skilled employment. Many jobs such as those for drivers and people who mix cement are said to be advertised in the community only after outsiders have already filled the positions. No one wanted their names used for the story out of concern that they could be excluded from future jobs providing transport for Tullow. Their claims were confirmed by government officials.

The Transportation Association members explained that established businessmen and politicians are benefiting from the current system: “Individual drivers or car owners cannot meet Tullow’s stringent requirements”, argued one of the spokespeople. Very few of members of the Association are qualified: “We had to apply through politically-connected local businesses who receive most of the tenders and take a large cut of the profits”, they explained. Even then, many jobs are still filled by people coming in from Nairobi before they are advertised in the local community.

Member of Parliament for Turkana South, Hon James Lomenen, confirmed allegations made by the Transportation Association.

A statement released by Tullow after recent protests said that more than 800 of its 1,400 employees in its Kenya operations are from the Turkana region. Government officials have called into question the local employment figure provided by Tullow. They requested an employment audit as part of the Memorandum of Understanding to end protests by the local community.

Mbogo said he also could not share documents or data related to the government of Kenya without permission by the Ministry of EnergyTullow made its employee list available to the Land Quest team to demonstrate that is transparent about what they pay and who they pay. The data provided to Land Quest raises several red flags, including large numbers of high skilled jobs for employees from outside of Turkana for work that would seem to require low skill levels that could be provided by local candidates.  Due to the relationships between government and the oil industry, independent verification of the validity of the data provided in the audit is required.

The list illustrated how the majority of the employees by Tullow and its subcontractors are only from Turkana South and Turkana East sub-counties. These areas are where the oil is located but there have been concerns by other residents of the larger Turkana County that they are not being given opportunities. Members of the Turkana Transport Association lamented that this is an open discrimination whereas they have all as a county felt the marginalization from the national government.

In the Memorandum of Understanding between the Ministry of Energy and Tullow Oil, the government mentions reimbursing Tullow for its financial losses due to community protests despite criticism that Tullow is already under-committed to the community.

Several local politicians the Land Quest team spoke with agreed to say that what the county needs is to ensure that there are funds to improve overall living standards, beyond making available limited employment opportunities and a handful of scholarships.

Without careful oversight, experts warn that the oil boom can depress other, more sustainable areas of economic growth, such as manufacturing. 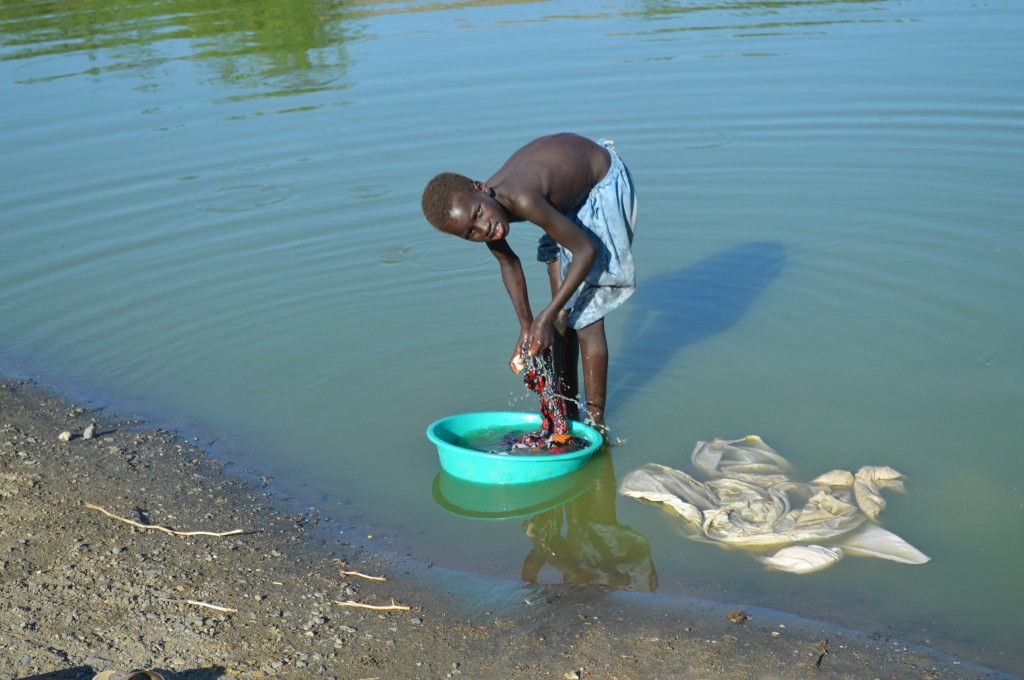 A child does laundry in a water catchment built by the Spanish Nariokotome Mission in northern Turkana. Most children in Turkana do not go to school and marry young, disqualifying them from training programs for high-level jobs.

The products of other industries will no longer be competitive due to inflation brought about by the influx of wealth. This economic phenomenon, known as the “Dutch Disease”, can be mitigated by strengthening oil-related industries that could continue to thrive after the natural resources dry up. But only if the infrastructure is developed to link these industries to other regional markets. Without economic controls, oil companies could quickly gobble communal grazing lands up and the local population will be left without any alternative employment.

Turkana County Assembly Speaker, Rt. Hon Geoffrey Eyeane Kaituko, said he is scrambling to prepare the county assembly, elected in March, for the task of legislating. Beyond basic training in law making, oversight, budgets and reporting, he is aware of pressure to ensure that the county is bringing in revenue to ensure that locals benefit in the meantime.

“We need to ask our financial folks in the county executive, how much our current local revenues are”, Kaituko added. The county has a mandate to work with the national government. It is prioritizing environmental standards, transparency and accountability and local revenue collection to ensure that the county is not dependent on the national government’s protracted and seemingly secretive legislative process to reform revenue collection and send money to Turkana.

Property taxes, levies and royalties all seem to him to be promising options to pull Turkana out of poverty indirectly through the oil industry.

But there is no legislative framework in place to ensure that regulation grows with the industry, which may begin full scale oil production as early as 2018 if the necessary infrastructure is built, according to Kaituko and Tullow Oil.

Martin Heya, petroleum commissioner at the Energy Ministry who did not respond to requests for an interview has also proposed strategies to ensure economic stability at a national level by establishing a sovereign fund, a state-owned investment accessible to communities after the oil wealth has dried up and an equalization fund, which ensures that the government saves more when oil prices are up and can draw on those savings when prices drop.

A recent report dubbed “Report of The Presidential Taskforce on Parastatal Reforms” commissioned by President Uhuru to recommend the way forward for formation of a sovereign wealth fund .

Kwame Owino the Chief Executive Officer of the Institute of Economic Affairs does not think the sovereign fund is a good idea.  He argued that country has urgent development concerns like infrastructure, health and education and it would not make sense to have a fund for the future when there are pressing development needs and growing national debt and drilling has already begun.

Landquest by Internews Kenya is licensed under a Creative Commons Attribution 4.0 International License.
Permissions beyond the scope of this license may be available at http://creativecommons.org/licenses/by-nc-nd/3.0/.

Built with support from

developed using JEO, design by Cardume and some icons by Entypo