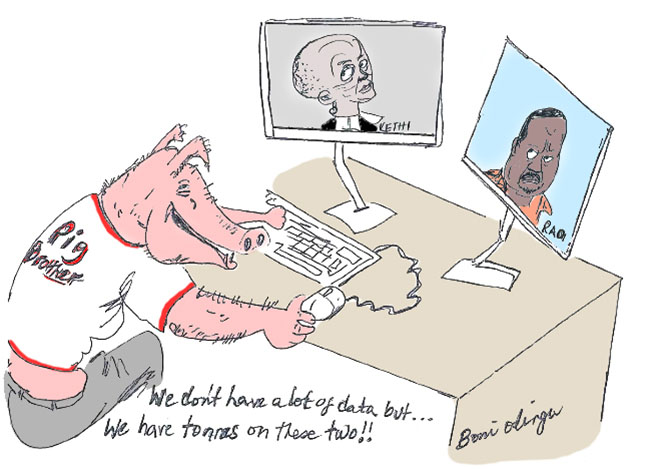 In the seminal story, Tomorrow's cities: How big data is changing the world  the BBC clearly illustrates the integral role that data, particularly social media data, plays in helping us understand trends and predict behavior. In that article they explain how tweets and social media updates that we throw up with abandon, can be used to gauge the health and happiness and priorities of a nation.

Similarly in Kenya, the time for mining data from such unlikely sources has arrived and the government just like corporate could end up with a data bonanza.

If you were to survey the Kenyan social media one could learn quite a lot not only about the psyche but also the expectations and obsessions of Kenyans who access social media. Curiously you would find that Kenyans regularly tweet about English football outcomes and developments. Whether that tells that Kenyans want local football improved or it is a vote of confidence in the English premier league TV production and branding beats me.

As for the very snoopy Nyayo era National Intelligence Services the social media pages of some liberal minds would be good in gauging their next ‘up to no good’ schemes. But what might make it rather hard to gauge the national mood is that social media is strictly demographical; just how many Kenyans have access to the internet? Current statistics has it at 16.2 million. Is that a critical mass of the populace?

Social media would be largely useful in informing on emergent or contemporary popular culture. This of course is information that is invaluable to mass marketers and politicians who would naturally want to match their products or messages to contemporary social demands. Now some would say why not just commission a survey? But this begs the question in which platforms are people more honest, on surveys or on social media?

A cursory glance at current trending topics on social media shows that many Kenyans are grappling with the increase in milk and maize flour prices. Would this bother the government? Are they ‘digital’ enough to worry about social media trends?

The number of Kenyans who send sms on traffic jams to radio stations must be colossal. This is the kind of data that would come in handy to the cities’ traffic management departments for planning purposes. But such data can only be of use in a situation with functional systems. The sheer planning, administration, data crunching, coordination and translation into policy is without a doubt not within the ken of the Kenyan government. My take on why that isn’t feasible with the current systems is just to contemplate the building of the East African railway. The builders of the railway knew that in order to quickly transport goods from the hinterland and onto the rest of the world markets you needed the rail system. It is the cheapest, quickest and most efficient; since one single train can haul many containers. How that was left to go to seed while strengthening road transport underscores just how rhyme and reason are not part of the establishment’s disposition.

Mining and use of digital data presupposes a rhyme and reason disposition. A visit to a police station to report a criminal incident makes you cringe and give up on the seriousness of the government with gathering data. A serious police data gathering system would not only help put a finger on the city’s crime pulse but also to predict and offer solutions. For now, it is the Kenyan corporate world that is running to the bank with big data. It would be interesting to study the Mpesa transactional data and of course the current Bonyeza ushinde wave to understand Kenyan habits. But of course this would ultimately be snooping on people. But armed with the kind of data they are collecting Kenyan businesses must be thanking technology for just how interesting and clairvoyant their businesses have become. Former Safaricom CEO Michael Joseph’s ‘peculiar calling habits’ diatribe was such a knee-jerk poor appreciation of a useful data trove!

Given Kenya’s previous authoritarian history it would seem that the only government institutions that enjoy working systems and who would find current data a boon are the intelligence services, perhaps that explains how such a poor policing system could recognize that they had once had British terror suspect Michael Adebolajo on their cross hairs!

But the point is clear, big data is a treasure trove for everyone interested in development; be it in the business of governance or in real business.