Kenyan media warms up to infographics 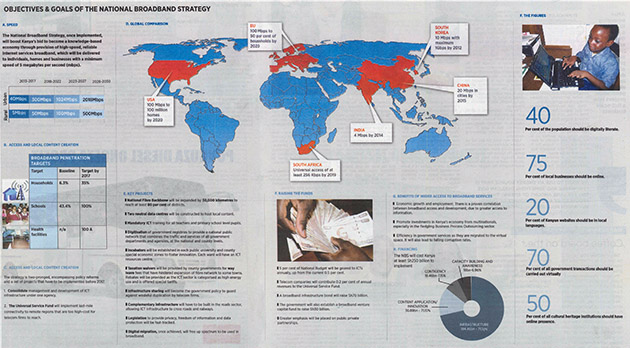 Tuesday 23rd July 2013
Science and Technology
Agnes Rube
View Category
It is a welcome development that the print media in Kenya is using more infographics in their storytelling.  One of the latest ones, shown below, was on development of internet access in Kenya. The infographic was published in The Daily Nation.

Overall it has a great structure in terms of placement of the design elements. The grey background color gives a neutral framing while the red and blue colors provide good contrast. So far so good, let us take a closer look.

I love that the designer used the world map as the infographic’s focus point. It beautifully  represents comparative data from around the world. The red color marks out the countries clearly, while being friendly to color blind readers. This cute doughnut chart makes a great visualization of the budget of the National Broadband strategy. I would have liked to see more charts and graphs like this and a lot less text.

But the infographic has way too much text. The graphic designer or journalist should have reduced about on third of it, simplified the information and visualized more of the data.  For example, the infographic states that national fiber backbone will be at least 30,000km long without giving the reader any context of how far that is. Some googleing and simple math could have simplified this to three quarter of the circumference of earth.

The only bar graph of the infographic is pretty good. It only has one problem – the color coding. The same color for urban and rural can fool the brain to think the speed is equal, when in fact the rural connection will be slower. A better solution would have been to have the same color shade for the similar speed. See example on right.

The table looks like it was copy-pasted out of a word document. Apart from the typos, the language should have been simplified. Words like “baseline” belong in policy documents and should not find their way to newspapers, where simpler explanations like “current coverage” are easier to understand.
Instead of mixing pictures and icons in the same design element, I recommend you go for just icons. More icons make it easier for the reader to navigate in the infographic. This is because the brain digests pictures and icons better and faster than text.

On the free online platform thenounproject.com I found many icons that could have been used (for an example hospital, education, house, speedometer, piggy bank, money, coworking space, partnership, law, computer, flip chart).

Lastly, I wish the infographics headline would have been a bit “sexier” as they say in the newsroom. Objectives & goals of the national broadband strategy sounds a bit dry to me. A headline like, Coming soon: high speed Internet would have grabbed more readers attention better.

To learn how to create compelling infographics, please contact us at:  [email protected].