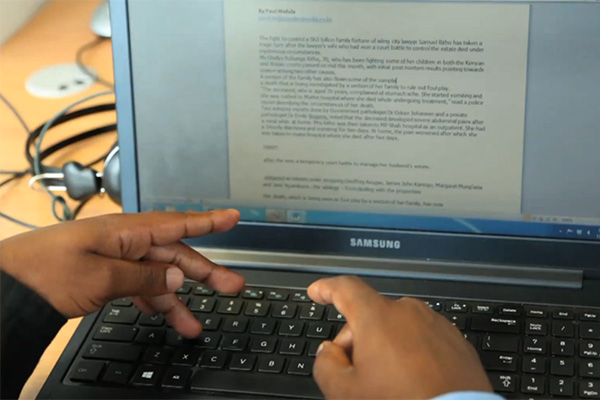 Five Kenyan media professionals, including two print journalists, a TV journalist, a developer and a graphic designer, graduated as the first class of the Internews Kenyan data journalism fellowship. On February 21, 2014, the fellows celebrated after completing 16-week data journalism training and production that raised awareness about the misspending, corruption and inequality that plague Kenya’s public healthcare system.

Telling the story behind the numbers

During the fellowship,the participants learned how to access, scrape, analyze and visualize data using digital tools. They also gained an appreciation of interconnections in data – with the ultimate aim of unearthing stories buried in data through investigative journalism.

“The more we worked in data journalism, the more we realized that data journalism is teamwork,” explained Dorothy Otieno, the Internews in Kenya Data Journalism Trainer who designed the fellowship to build a sense of community.

The fellows’ stories included reporting on issues such as malaria, family planning, maternal and child health and HIV.

Driven by too many questions on health financing in a devolved system of government, fellow Paul Wafula, a journalist from The Standard Investigative, used his data journalism training to get answers. His story Change for Health was published a five part series in The Standard.

“I have come to appreciate what we have been missing in our reporting because the story I have done, if I had done it without data, my email would be full of questions,” says Wafula, who examined whether the county budgets reflected local health crises. “We expected that under devolution, the government would respond to the basic needs of the people and in West Pokot, they would now have the resources to deal with eye issues or if you are in Kilifi, you could address elephantitis because that is your most pressing health issue that had been neglected by the national government. But I discovered that the county governments were falling back on the national government’s way of doing things”

Watch this video to find out how he did the cross platform, multimedia story, which was published as a series in The Standard.

Last month, the fellows saw some of the first concrete policy results of their investigations as they shifted from data as evidence to data that reveals the root of the problem of poor healthcare  in Kenya.

Wafula’s second investigation focused on an emergency cash transfer safety net program for the poorest Kenyans including orphans and vulnerable children and revealed that legislators had changed the distribution formula for allocating Sh12.3 billion from an earlier model in which government poverty and health indicators dictated distribution to an equal division among counties in order to win the favour of wealthy constituencies. “Being a poverty program, I knew that the poorer a place, the larger the allocation,” explained Wafula.  “Here you found that a constituency in which 30 per cent of the constituents were poor getting the same amount as a county where 80 per cent of the population was poor.
I realized that if you were poor in Lamu you were eight times more likely to get money than a poor person in Turkana.”

After the story ran, Labour cabinet secretary Kazungu Kambi revealed to Wafula that Sh600 million were handed out to ghost recipients. “I knew money was disappearing and was given to people who were not deserving but I didn’t know how much or where it was going,” explained Wafula, who doesn’t believe that the government would have admitted to the corruption if it were not for his initial investigation of the distribution failure.

Kambi has ordered an audit to identify and remove ghost recipients and other undeserving cases, developed new vetting committees that include community leaders to identify recipients and enlisted a private telecommunications company, Safaricom, to distribute the funding.  Several agencies funding the project have raised questions about why the government allowed politicians to change the original distribution plan that had been approved by donors.  Various stakeholders contacted the journalist and requested his raw data for further analysis.

When the sun sets in Turkana;Hunger stakes and stripes in the North

When the sun sets in Turkana; Hunger stakes and stripes in the North by fellow Mercy Juma ran as the lead news story on January 21.  The 12-minute, data driven story reveals that malnutrition in children is a growing problem in Kenya as famine become more intense and frequent. The station phone was ringing off the hook before the story finished airing. Due to the massive reaction to the story from individuals and organizations, within hours the station established a relief fund for Turkana County as explained in the follow up story: Cases of malnutrition on the rise in Turkana hospitals.

“Looking at the data we realised the time between droughts was shrinking and consequently more people were affected.  That is where malnutrition came in because the number of people of stories being brought to hospital suffering from malnutrition was really high and it’s not something new but somehow nothing is being done,” explained Juma. “It should be the county government doing something but we learned that even the county government doesn’t have a plan for nutrition for its people.  The national government has plans and policies that are drafted but not discussed or passed and that is what motivated the story.

The fund had raised Sh1.2 million by the end of January.  Local politicians also offered to sponsor the families featured in the stories. The family she featured was also recruited into the safety net program that was the subject of investigation of fellow Paul Wafula’s story. The print version of the story Famine strikes again  brought in more donations. She followed up the article with the TV story, Hunger keeps children away from school in Turkana. Since then there have been prominent stories in the media daily on desperate famine situation in Northern Kenya in Kenyan media, which has historically shown a lack of interest in the plight of the isolated, impoverished regions of northern Kenya.
Even more important for the fellows who worked on the story, the Drought Monitoring Unit asked Mercy to share data from her story because they claimed they were not aware that the situation had become so desperate although the same department had tried to charge her to access the data when she began her investigation while the Ministry of Water plans to travel to Turkana to dig more boreholes. The government through the Ministry of Planning and Devolution released Sh2.3 billion to go towards relief distribution in Turkana County, a development that Mercy is following closely.

An in-depth look  contraceptives
Fellow Mercy Juma, a broadcast journalist at NTV, produced a cross-platform and multimedia story that links the high number of unsafe abortions in Kenya to low contraceptive use. Her 10-minute TV story, “Grave Choices,” was aired on NTV. The print version was published as a cover story in The Daily Nation.

In this video Mercy explains how she looked deep into data to get insights on the issue of unsafe abortion.

A parallel story by fellow Samuel Otieno illustrated the financial drain on the country by fixing botched abortions rather than investing in contraceptive access.

Data journalism beyond the fellowship
Since data journalism is still in its infancy in Kenya, the fellows now have established beats that give them more freedom to pursue data-driven stories about health spending, drought, poverty and other key governance issues when they return to their media outlets.  They presented their stories at the inaugural Online News Association Nairobi event, discussing their process with other digital journalists in Kenya and growing the data journalism community.
“It was an interesting journey that we were required to develop a culture of teamwork right from the story conception phase,” said Michael Mosota, the graphic design fellow from The Nation.  “I have picked up that culture of teamwork and now all the stories I work on I participate from the conception stage and I train other designers on print and online visualization tools.”

Otieno explained the attitude shift at the media management level at The Nation. “It wasn’t me calling the editors to tell them about data journalism,” she said. “It was an editor calling me and me telling him that he could read the story in his paper on Tuesday because another editor had agreed to run it.”

The audience had seen many of the stories on television and in the newspaper and expressed surprise at the policy impact that the young journalists had made over such a short time.  They expressed that Kenyans want to see money allocated in the right place and health issues addressed through policies that are grounded in data.

The fellows are trailblazers in the developing world, which has so far escaped the media industry crisis that has forced many Western media outlets to explore data journalism as a strategy to become solvent in the age of free online content.

“You should be commended for transforming yourselves into data journalists not to keep your jobs but rather because you are passionate about journalism and convinced that your data-driven stories can help Kenyans become more engaged citizens and influence the direction of this country,” Data Journalism Advisor Eva Constantaras told the fellows at the conclusion of the ceremony.